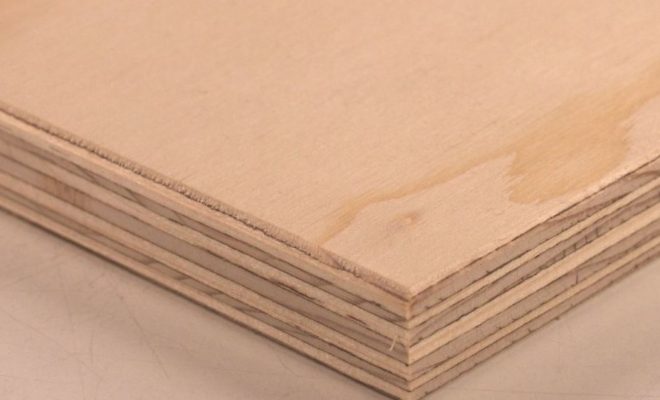 Plywood is a material manufactured from thin layers or “plies” of wood veneer that are glued together with adjacent layers having their wood grain rotated up to 90 degrees to one another.

It is an engineered wood from the family of manufactured boards which include medium-density fibreboard (MDF) and particle board (chipboard).

The word ply derives from the French verb plier, “to fold”, from the Latin verb plico, from the ancient Greek verb πλέκω.

All plywoods bind resin and wood fibre sheets (cellulose cells are long, strong and thin) to form a composite material.

This alternation of the grain is called cross-graining and has several important benefits: it reduces the tendency of wood to split when nailed at the edges; it reduces expansion and shrinkage, providing improved dimensional stability; and it makes the strength of the panel consistent across all directions.

There is usually an odd number of plies, so that the sheet is balanced—this reduces warping.

Because plywood is bonded with grains running against one another and with an odd number of composite parts, it has high stiffness perpendicular to the grain direction of the surface ply.

Smaller, thinner, and lower quality plywoods may only have their plies (layers) arranged at right angles to each other.

A typical plywood panel has face veneers of a higher grade than the core veneers. The principal function of the core layers is to increase the separation between the outer layers where the bending stresses are highest, thus increasing the panel’s resistance to bending.

As a result, thicker panels can span greater distances under the same loads.

In bending, the maximum stress occurs in the outermost layers, one in tension, the other in compression.

Bending stress decreases from the maximum at the face layers to nearly zero at the central layer. Shear stress, by contrast, is higher in the center of the panel, and at the outer fibres.

There are different varieties of plywood exist for different applications:

Softwood plywood is usually made either of cedar, Douglas fir or spruce, pine, and fir (collectively known as spruce-pine-fir or SPF) or redwood and is typically used for construction and industrial purposes.

Plies vary in thickness from 1.4 mm to 4.3 mm. The number of plies—which is always odd—depends on the thickness and grade of the sheet. Roofing can use the thinner 5⁄8-inch (16 mm) plywood.

Subfloors are at least 3⁄4 inch (19 mm) thick, the thickness depending on the distance between floor joists. Plywood for flooring applications is often tongue and groove (T&G); This prevents one board from moving up or down relative to its neighbor, providing a solid-feeling floor when the joints do not lie over joists. T&G plywood is usually found in the 1⁄2-to-1-inch (13 to 25 mm) range.

Hardwood plywood is made out of wood from dicot trees (Oak, Beech and Mahagony) and used for demanding end uses. Hardwood plywood is characterized by its excellent strength, stiffness and resistance to creep. It has a high planar shear strength and impact resistance, which make it especially suitable for heavy-duty floor and wall structures.

Tropical plywood is made of mixed species of tropical timber. Originally from the Asian region, it is now also manufactured in African and South American countries. Tropical plywood is superior to softwood plywood due to its density, strength, evenness of layers, and high quality.

It is usually sold at a premium in many markets if manufactured with high standards. Tropical plywood is widely used in the UK, Japan, United States, Taiwan, Korea, Dubai, and other countries worldwide.

It is used for construction purposes in many regions due to its low cost. However, many countries’ forests have been over-harvested, including the Philippines, Malaysia and Indonesia, largely due to the demand for plywood production and export.

High-strength plywood, also known as aircraft plywood, is made from mahogany, spruce and/or birch using adhesives with an increased resistance to heat and humidity. It was used in the construction of air assault gliders during World War II and also several fighter aircraft, most notably the multi-role British Mosquito.

Nicknamed “The Wooden Wonder” plywood was used for the wing surfaces, and also flat sections such as bulkheads and the webs of the wing spars.

The fuselage had exceptional rigidity from the bonded ply-balsa-ply ‘sandwich’ of its monocoque shell; elliptical in cross-section, it was formed in two separate mirror-image halves, using curved moulds.

Structural aircraft-grade plywood is most commonly manufactured from African mahogany, spruce or birch veneers that are bonded together in a hot press over hardwood cores of basswood or poplar or from European Birch veneers throughout.

Basswood is another type of aviation-grade plywood that is lighter and more flexible than mahogany and birch plywood but has slightly less structural strength.

Aviation-grade plywood is manufactured to a number of specifications including those outlined since 1931 in the Germanischer Lloyd Rules for Surveying and Testing of Plywood for Aircraft and MIL-P-607, the latter of which calls for shear testing after immersion in boiling water for three hours to verify the adhesive qualities between the plies and meets specifications.

Howard Hughes’ H-4 Hercules was constructed of plywood. The plane was built by the Hughes Aircraft Company employing a plywood-and-resin Duramold process. The specialized wood veneer was made by Roddis Manufacturing in Marshfield, Wisconsin.

Usually faced with hardwood, including ash, oak, red oak, birch, maple, mahogany, Philippine mahogany (often called lauan, luan or meranti and having no relation to true mahogany), rosewood, teak and a large number of other hardwoods.

Flexible plywood is designed for making curved parts, a practice which dates back to the 1850s in furniture making.

Aircraft grade plywood, often Baltic birch, is made from three or more plies of birch, as thin as 1⁄64 inch (0.40 mm) thick in total, and is extremely strong and light.

Wiggle board is often glued together in two layers once it is formed into the desired curve, so that the final shape will be stiff and resist movement. Often, decorative wood veneers are added as a surface layer.

In the United Kingdom single-ply sheets of veneer were used to make stove pipe hats in Victorian times, so flexible modern plywood is sometimes known there as “hatters ply”, although the original material was not strictly plywood, but a single sheet of veneer.

Marine plywood is manufactured from durable face and core veneers, with few defects so it performs longer in both humid and wet conditions and resists delaminating and fungal attack. Its construction is such that it can be used in environments where it is exposed to moisture for long periods.

Each wood veneer will be from tropical hardwoods, have negligible core gap, limiting the chance of trapping water in the plywood and hence providing a solid and stable glue bond. It uses an exterior Weather and Boil Proof (WBP) glue similar to most exterior plywoods.

Some marine plywood has a Lloyd’s of London stamp that certifies it to be BS 1088 compliant. Some plywood is also labeled based on the wood used to manufacture it. Examples of this are Okoumé or Meranti.

Other types of plywoods include fire-retardant, moisture-resistant, wire mesh, sign-grade, and pressure-treated.

However, the plywood may be treated with various chemicals to improve the plywood’s fireproofing. Each of these products is designed to fill a need in industry.

Baltic Birch plywood is a product of an area around the Baltic Sea.

Originally manufactured for European cabinet makers but now popular in the United States as well. It is very stable composed of an inner void-free core of cross-banded birch plys with an exterior grade adhesive. The face veneers are thicker than traditional cabinet grade plywood.

Grading rules differ according to the country of origin. The most popular standards are the British Standard (BS) and the American Standard (ASTM). Joyce (1970), however, list some general indication of grading rules:

Face and back veneers practically free from all defects.

Face veneers practically free from all defects. Reverse veneers with only a few small knots or discolorations.

Face as A but reverse side permitting jointed veneers, large knots, plugs, etc.

Both side veneers with only a few small knots or discolorations.

For structural plywood, this grade means that the face has knots and defects filled in and the reverse may have some that are not filled. Neither face is an appearance grade, nor are they sanded smooth. This grade is often used for sheathing the surfaces of a building prior to being covered with another product like flooring, siding, concrete, or roofing materials.

Knots, knotholes, cracks, and all other defects permitted.

Face as BB, back as CC. BB as very little knots of less than 1/4 inches, slight discoloration, no decay, split and wormholes mended skillfully, matched colors, no blister, no wrinkle. Most popular choice for most applications.

Plywood is used in many applications that need high-quality, high-strength sheet material. Quality in this context means resistance to cracking, breaking, shrinkage, twisting and warping.

Exterior glued plywood is suitable for outdoor use, but because moisture affects the strength of wood, optimal performance is achieved where the moisture content remains relatively low. Subzero conditions do not affect the dimensional or strength properties of plywood, making some special applications possible.

Plywood is also used as an engineering material for stressed-skin applications. It has been used for marine and aviation applications since WWII. Most notable is the British de Havilland Mosquito bomber, with a fuselage made of birch plywood sandwiching a balsa core, and using plywood extensively for the wings. Plywood was also used for the hulls in the hard-chine Motor Torpedo Boats (MTB) and Motor Gun Boats (MGB) built by the British Power Boat Company and Vosper’s.

Plywood is currently successfully used in stressed-skin applications. The American designers Charles and Ray Eames are known for their plywood-based furniture, as is Finnish Architect Alvar Aalto and his firm Artek, while Phil Bolger has designed a wide range of boats built primarily of plywood. Jack Köper of Cape Town designed the plywood Dabchick sailing dinghy, which as of 2015 is still sailed by large numbers of teenagers.

Plywood is often used to create curved surfaces because it can easily bend with the grain. Skateboard ramps often utilize plywood as the top smooth surface over bent curves to create transition that can simulate the shapes of ocean waves.

There are coating solutions available that mask the prominent grain structure of spruce plywood. For these coated plywoods there are some end uses where reasonable strength is needed but the lightness of spruce is a benefit, e.g:

Birch plywood is used as a structural material in special applications e.g.:

Smooth surface and accurate thickness combined with the durability of the material makes birch plywood a favorable material for many special end uses e.g.:

Tropical plywood is widely available from the South-East Asia region, mainly from Malaysia and Indonesia.

The variety of plywood can be overwhelming, with cryptic labels that even home improvement and building materials store employees don’t understand. Some plywood panels can cost as little as $10, and others nearly $100.